Currently, there is a plethora of online resources for teaching German as a second language and one is absolutely spoilt for choice. Thus, I have created this post, in which I will evaluate five useful learning apps, including an assessment of which cognitive skills from Bloom’s revised taxonomy they engage (Köksal & Ulum, 2018; Bloom et al., 1956).

What is it?: Duolingo is perhaps the most famous language learning app in the world. It is available on any web browser, as a mobile app on iOS and Android devices and is free (though one can access a few additional but inessential features and removes ads by paying for Duolingo Plus).

Duolingo organises each language into a skill tree with each skill representing a set of game-like lessons which must be completed in order to progress to the next skill. Duolingo lessons are highly repetitive and involve translation from and into the target language, matching words to pictures, matching word pairs and repeating phrases and sentences into the microphone. Learners win lingos for completing lessons which are Duolingo’s form of currency that can buy extra lessons or “outfits” for the Duolingo owl. Learners can also compete against their friends.

Cognitive skills: Due to the somewhat repetitive memorisation that Duolingo lessons consist of, the lower cognitive skills of remembering, understanding and applying are the most utilised. Learners primarily need to be able to memorise words, phrases and chunks of language to succeed in the app.

Risk and drawbacks:
Since Duolingo Classroom provides teachers with plenty of control, risks are minimised. However, Duolingo’s approach to learning which relies heavily on memorisation is a major drawback. There is also a lack of authentic materials, and the provided audio recordings on Duolingo sound very robotic, unnatural and cannot compare to real interactive human speech. Not to mention some of the sentences Duolingo comes up with are quite bizarre and not particularly useful for real conversation, eg, ich bin eine Banane (I’m a banana).

How I would use it:
Due to the lower cognitive skills required in Duolingo, I would use it sparingly with complete beginners to the German language in year 8 and 9. For example, when there is a vocab test coming up, I would set summative homework on Duolingo Classroom which involves those vocab items.

What is it?: Seedlang is an application designed as an educational supplement to the famous YouTube channel, Easy German. It is a browser-based app designed specifically for teaching German to English speakers and can therefore operate on any device which has access to a browser. Unfortunately, Seedlang Pro costs 4.67 Euros (A$7.55) per month per user which gives access to all materials.

Seedlang features four menus: stories, vocab, trivia, patrons and discuss. Stories features a series of lessons categorised by topic in a tree-like sequence (similar to Duolingo). Vocab features interactive vocab cards which can be sorted by difficulty and word type. Trivia features quizzes categorised by difficulty for both general knowledge and the German language. Patrons features special materials for Patreon supporters of the Easy German YouTube channel, such as worksheets designed to be used with their videos. The worksheets consist of controlled practice exercises and end with a question for discussion. Discuss is a general discussion board which learners can post on in response to questions in the worksheets. Since it would be overzealous to analyse every feature of Seedlang, I will focus primarily on the worksheet exercises in the Patrons menu.

The Easy German videos embedded in Seedlang consist of vox pop style interviews where random people on the street are asked questions about a certain theme and produce spontaneous, unscripted responses. The videos feature both English and German subtitles.

Cognitive skills: When we apply Bloom’s revised taxonomy, this app covers remembering, understanding and applying. Creating is covered in the discussion board where students are encouraged to answer an open-ended question in German. However, in the exercises section, there is a lack of evaluating and analysing. This is forgivable for absolute beginners since they lack the proficiency to evaluate and analyse information at the same level as their native language. Since Seedlang tends to use authentic materials of a higher difficulty, it is more suitable for intermediate and advanced learners.

Risk and drawbacks: The major risk with Seedlang is that the inbuilt discussion board is unsuitable for schools since it cannot be monitored by a teacher and allows students to interact with strangers. A major drawback is the price which is the equivalent of $7.55 per month per user. In addition, the app, in its current form, does not allow teachers to set or monitor student work.

Classroom use: I would personally use the vocab and exercises connected to each video as activities that students can complete individually in class or as homework. Instead of using the discussion boards on Seedlang, I would either hold an in-class discussion, or, in the case where it is a homework exercise, create a discussion board on Google Classroom. Otherwise, I would print out the supplied PDF sheets and allow students to fill them out individually or in pairs while I play the relevant YouTube video on the smartboard or via the projector.

What is it?: Grimm Grammar is a browser-based app for learning German run by the University of Texas at Austin. It is a free reference grammar resource which uses Grimm fairy tales to teach grammar points.

Learners can pick a grammar section and will be presented with grammar explanations with examples taken from the fairy tales. New vocabulary is hyperlinked to audio recordings to facilitate pronunciation. At the end of each section, there is usually some form of practice exercise which are often gap-fill, word bank or multiple choice activities. Grimm Grammar is easily the most engaging and entertaining technical grammar reference for German available online.

Risk and drawbacks: As a reference resource, there are not really any risks associated with Grimm Grammar. However, one major drawback is that it is a very text-heavy app which has few pictures and not much colour and, therefore, might not be the most engaging option for very young learners. There is also a lack of opportunity for higher level cognitive skills since the exercises on Grimm Grammar narrowly assess specific grammar points in isolation. Additionally, Grimm Grammar assumes a certain degree of metalinguistic proficiency in learners. In Australia, many students would need to be taught what a determiner, preposition or conjunction is in English before attempting to grapple with these concepts in a new language.

Classroom use: I would use Grimm Grammar at the higher levels (Year 11 and 12) for grammar revision, which students can complete individually in class after a grammar presentation or as homework. I would also consider using it as resource for free writing exercises, e.g., a short creative writing task where students write a personalised version of a popular Grimm fairy tale. 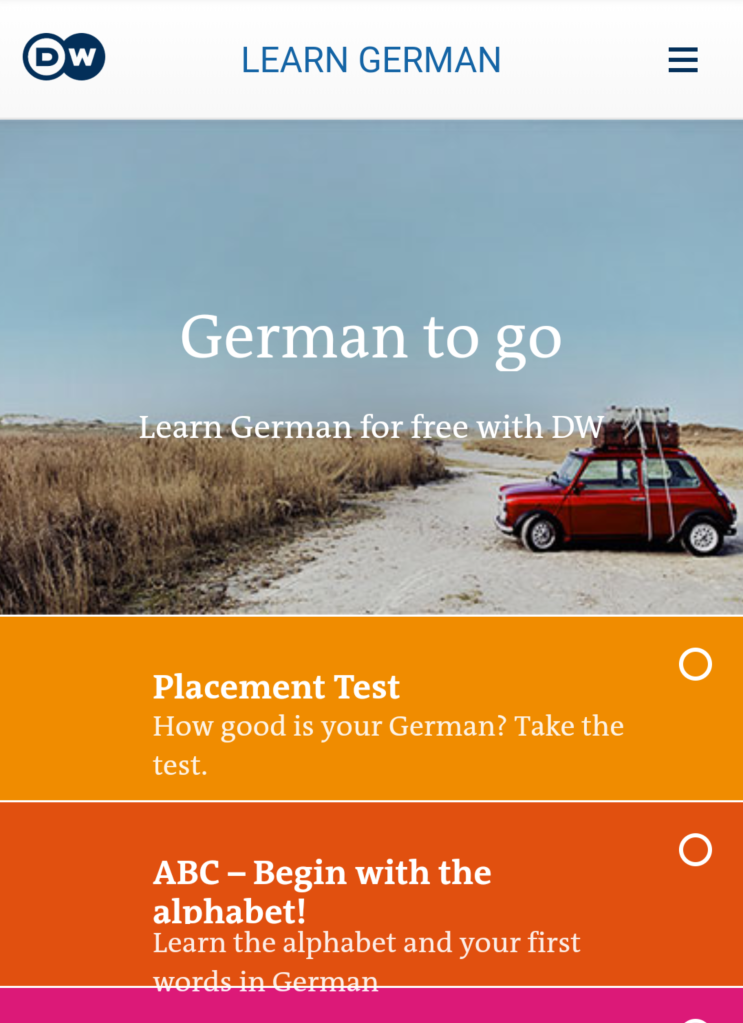 What is it?: Learn German is a mobile iOS, Android and browser-based app designed by public international broadcaster Deutsche Welle. It is both completely free and ad-free.

Learn German, like Seedlang, seamlessly incorporates video into lessons and includes a vocabulary learning feature. However, Learn German also features a grammar section which acts as a concise reference grammar. There is also a useful placement test for non-beginners. The embedded videos are from the Deutsche Welle educational Youtube film series, Nicos Weg. The film series follows a Spanish man, Nico, who has recently arrived in Germany and begins to learn the language from scratch. Therefore, users learn German as Nico does through his everyday encounters, and the language gradually becomes more challenging.

Cognitive skills: Learn German is unique in that higher level cognitive skills are often involved in the exercises which accompany the videos. For example, many exercises require users to analyse and evaluate what they have seen in a video, like in the exercise in the screenshot below which requires careful interpretation. Additionally, once the user reaches a certain level, all questions are presented in German which requires users to think in the language as opposed to merely translating everything.

Risks and drawbacks: One of the major drawbacks to Learn German is that it is quite intensive and more suited to adult learners than children. The exercises become difficult early on and require those higher level cognitive skills which may be demanding for middle school students. In addition, the embedded videos are highly scripted, melodramatic and feature actors who are heavily modifying their speech; while this increases comprehension, it severely lacks the authenticity seen in Easy German videos. Additionally, videos only have German subtitles available.

Classroom use: Due to the difficulty of exercises, for middle school level students I would use the embedded videos in Learn German, design my own simplified practice exercises for students and then allow students to do the Learn German exercises if they find mine too easy and finish them early. For upper level students, I would pair the videos and exercises with free writing or interactive spoken tasks to engage that higher level skill of creating.

What is it?: Der Die Das is a free, simple iOS and Android app which does not have a corresponding browser-based version. It is solely dedicated to one aspect of German grammar, definite articles.

German, like Latin, Greek and Russian, distinguishes nouns based on the grammatical genders, masculine, feminine and neuter, and one of the greatest challenges for learners of every level is remembering the gender of a word. Der Die Das presents vocab items with images, organised according to difficulty or theme, and requires the user to guess the right gender in order to get a point. The user’s points reset when an incorrect answer is chosen.

Cognitive skills: Since Der Die Das is built entirely around memorisation, it really only operates at the low cognitive level of remembering. In certain cases, users can apply a general rule to predict gender (as seen in the picture below), but, unfortunately, there are exceptions to every rule.

Risks and drawbacks: The major drawback to Der Die Das is that its highly repetitive game-like operation can become fatiguing when used for over 5 minutes. The fact that there is no browser-based version yet is disappointing as it would work well as a fun whole class game where teams have to guess the correct gender.

Classroom use: I would use these app as a short 5 minute team quiz at the start or end of a lesson by screencasting it from a tablet onto a smartboard. Apart from that and as vocab practice, I do not think there are very many ways to implement Der Die Das in the classroom. Nonetheless, I think it is a fun tool for learners outside of the classroom.

View all posts by MG